Wearing same as yesterday, although I did change to go out last night into a green top and brown jacket, flat shoes and jeans – just in case you think I wear the same thing all day every day:)

I forgot to mention that I packed myself one luxury – my silk dressing gown that I had tailor-made for me in Bangkok. It's been great to have, as it makes me feel relaxed and when in other people's homes I don't feel I have to get fully dressed. 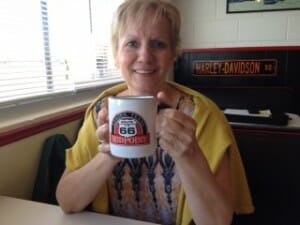 We set off early this morning aiming to stop at Midpoint Cafe for breakfast, which as the name implies is the midpoint between Chicago and LA – 1,139 miles each way. It's a must-do place to stop and is clean, delicious, friendly and 1950's style full of original stuff from when the cafe first began. The guy who owns it now is from Tennessee and is restoring it to its former glory. They sell fabulous Ugly Pie, and Route 66 memorabilia. I had the best vegetable omelette, whilst Steve had a full breakfast and as much coffee as you can drink. And of course we bought some Midpoint Cafe souvenirs.

The owner suggested that as Steve is a car fanatic we should stop off at Russell's Car Museum, a free museum just off junction 369 over the border in New Mexico.

We arrived in Albuquerque late afternoon to around 86F and sunshine, a bit cooler than Oklahoma but still hot. Spending so much time in the car means you don't get to enjoy a sun-kissed look. The first thing we noticed coming into the city was how different the driving was – so far the standard of driving on the freeways had been good and courteous, with everyone leaving plenty of room for each other and letting people in. But here they drive a lot faster, a good deal closer to each other's bumpers and weave in and out of the lanes – and bearing in mind they can undertake here which we are not used to in the UK, they seem to come at you from all directions.

The Holiday Inn Express we are staying at is advertised as in Old Town, but in reality it's a good 5 minute drive away and with the freeways outside the window not the quietest place. But they upgraded us to a suite so we have lots of space, which is nice. TOP TIP: join the loyalty programmes of any hotels you use – it really makes a difference to the little extra services they give you for free.

We decided to hop in a cab and go to Old Town as we had read on TripAdvisor that it's a great place for bars and restaurants. However, when we were there at around 6.30 pm most shops were closed and only two restaurants and no bars were open. The two restaurants were owned by the same people and the one we chose wasn't great. If we were here again for just one night I would chose a hotel in Nob Hill or at least go there to eat. Old Town is worth a look – it's quaint and cute, but on its own it doesn't give a fair view of the city.