When we were in Springfield someone had said if we had time we should make a trip to Santa Fe, and as there didn't seem to be a lot going on in Albuquerque we decided to head the hour north. In fact, the original Route 66 ran through Santa Fe so it seemed right to go there for that reason too.

The guide book says it is the most popular place for Americans to holiday in, which I am really surprised at. It is a venue all year round though, having a strong ski season as well as summer trade. It was also at least 10 degrees cooler here, so remember a jumper or jacket. I wore cut-off jeans and a sleeveless top but some people were in jumpers and jackets. 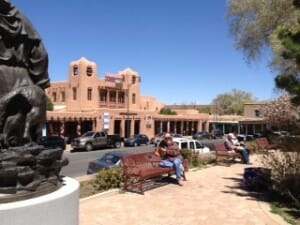 Santa Fe is a calmer, more beautiful place where everything centres around the Plaza. The Cathedral, the Governor's House (which dates back to 1600 when the Spanish were here), museums, shops, bars and restaurants are all here. There is plenty of parking, some on meters which are expensive and you need coins for, but we parked at the edge of the centre all day for $5 and only had a short 5 minute walk to the Plaza. It is a very artistic place, so there's plenty of art galleries as well as art museums. Prices are more expensive but from what we saw, most goods are made in the USA rather than China.

The Local Authority took the decision some time ago to opt for a unique look to the buildings, and from what we were told they exert a lot of control – hence the buildings all have an adobe look and brown earthy colour to them, and most are just one or two storeys high. It makes for a homogeneous look but is a bit controlled for my taste. The museums often offer free guided tours, and having met the local guide for the New Mexico History Museum and Palace of the Governors at the most delicious coffee shop ever (C.G. Higgins on Lincoln Avenue, just across from the museum, where they make their own amazing Cinnamon Buns with cream cheese frosting on the side – one is more than enough for two with a delicious coffee) we joined her tour. We would thoroughly recommend that museum but don't be swayed to buy the 4 Museum Pass unless you are really sure you will visit all 4 of the museums listed. We were led to believe there was more choice of museums and we didn't get our money's worth – it would have been cheaper to have paid for each one we went in separately. As the day got hotter we decided to retreat to a rooftop bar (beer station) and enjoy the local craft beer – it is big here too with breweries in Santa Fe and Albuquerque. Now I'm not a beer girl myself but on the guy's advice I tried a local beer called “A Touch of Hefen” – it was delicious with a banana and vanilla taste. I have never tasted beer like that and it was yummy. Steve had a dark beer which he reported was more like an English Bitter. We also had a delicious small pizza to share. This brings me to one thing I have forgotten to mention before, but as we sit down to enjoy a small pizza between the two of us, the Americans around us were tucking into large pizzas each! Portions are big here, but you do get the option to chose smaller if you want to and so far we have had ample opportunity to eat healthy, freshly cooked food. That said, the fast food franchises are everywhere and as you travel the freeways the signs come up every few miles until you feel brainwashed into thinking about food. 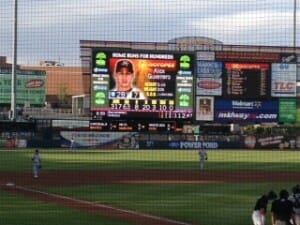 Back in Albuquerque we rushed to change and head off for our first ever baseball game – the Albuquerque Isotopes against the Sacremento Cats. It started at 6.35 pm and on advice we arrived about 30 mins early to look around, find our seats etc. It's really easy to park and cost $5. Inside, once you have picked up any food or drink you get shown to your seat. They say the best are right behind the Home Plate (where the hitter stands) and that's where our seats were. We met some really friendly people who explained the rules to us and the atmosphere was friendly, happy, relaxed and a lot of fun. There was constant music, audience participation and full-on entertainment – nothing like a cricket or football match at home in the UK. People were up and down all the time getting beers, nachos, foot long hot dogs… and not just once but endless times! If you get a chance it is well worth going – I thought I would only go just this once to say I'd been, but I would definitely go again (check fixtures and buy baseball tickets here). TOP TIP: the evening started off really hot – you may even be sitting in full sun – but as the night wears on it cools off a lot so be sure to take a warm jacket or fleece, and maybe even a blanket for your legs. I had changed into jeans, boots, long sleeved t-shirt and jacket but I still needed Steve's fleece too when it got colder.