Our next stop is St Louis – about 5.5 hours across the state of Illinois into Missouri. We left Chicago just after 9am to miss the rush hour and followed the lake shore road to the official start point of Route 66. The weather was grey and a bit wet, but it doesn't seem to matter much when everything is new. The scenery on most of this part is pretty bland, flat and tree-less; huge fields as far as the eye could see for growing corn. However the barns are interesting – they're very tall with sharp roof pitches; Steve said that was to stop the snow settling on them. The roads in Chicago and the main interstate were in a shocking state – as bad as at home in the UK. 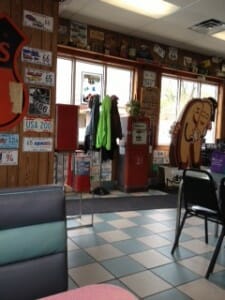 We stopped off at The Cozy Dog Inn, the home of the ‘Cozy Dog' where the hot dog on a stick was invented – and yes we tried one!

Fuelled up in a tiny town and had no problem at all using our credit card to pay at the pump. We had read it could be a problem, but it hasn't been so far.

We arrived in St Louis around 4pm and thank goodness for Doris (our nickname for the SatNav!) – she is a blessing. Here we are staying in a loft apartment (again booked through airbnb.co.uk) in the downtown area not far from the Gateway Arch which we plan to see tomorrow morning, along with the City Museum which our Chicago host Amy had said we must see.

Amy had also recommended visiting a micro-brewery of a friend, but when we looked on SatNav it was 5 miles away and after a day's driving we decided not to go, especially if the point was to drink beer! Instead, we looked up the local recommendations on the internet and chose the Bridge Tap House & Wine Bar. This was two streets away (corner of Locust and 10th) and turned out to be amazing. They had over 40 beers on tap from all over the USA and the world, and there turns out to be a vibrant micro-brewery scene here. The wine list was good too. They serve their beer in 4 sizes and in different style glasses, but in the main they were serving most beer in what looked to us like brandy glasses. It looked classy like that, but I'm not sure the average British bloke would think so if he was served it like that down the local! Steve tried a local wheat beer, which I had a taste of and it was quite sweet. Then we saw a lot of people drinking a dark beer, which turned out to be Kentucky Breakfast Beer, a beer that had flavours of coffee, chocolate and Bourbon (Bourbon because it is put in Bourbon barrels for 30 days). It truly did taste of all those things.

Then we walked to a South American restaurant called Mango across from the apartment and had some small tapas style dishes: ceviche, shrimps in garlic, fried fish, spinach pie, and a bottle of wine. Very nice food and ambience with very friendly staff.