TOP TIP: If it's souvenirs that you're after, it's worth taking a look at Walgreens. It calls itself a pharmacy but it is so much more than that, and it has a range of souvenirs at reasonable prices.

On our trip out of Las Vegas we decided to retrace our route back to Kingman so that we could pick up Route 66 where we left off. We knew this would add an extra 3 hours to the drive, but we had come to drive Route 66 and we wanted to stay true to that goal. 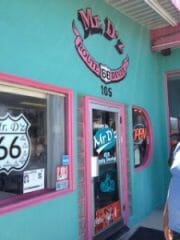 Back in Kingman we stopped at the Route 66 Museum (Jamie Jensen's book pointed this out to us) then went across the road to Mr D'Zs – a 50's style diner – for breakfast where Denver omelettes (with cheese, peppers, ham and onion) are rapidly becoming our favourite.

Driving the old historic Route 66 from Kingman to Barstow, via Oatman avoiding the new alternative I-40, was truly memorable. The first part to Oatman involved a steep climb on a very narrow road with sharp switch backs and sheer drops, but the views were stunning. About 8 miles from Oatman we passed a working gold mine (recently re-opened) and that was a first for me. Oatman had been a gold mining town since around 1902 and in its heyday over 10,000 people lived there, with more than 20 saloons. But it died when the gold mine closed, and it was one of the victims of the redirecting of Route 66, as so many former prosperous and now deserted towns were. The town still has wooden boardwalks and genuine old buildings including the Oatman Hotel, where Clarke Gable and Carole Lombard spent their wedding night. You can go and see the room just as it was then, and even stay a night at the hotel. There are burros roaming the streets who will give you a good nip if they think you have any food. 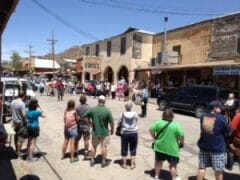 For fun and to raise money for the local children's hospital, locals re-enact a bank robbery and gun fight in the middle of the road. It was just simple fun and worth making the trip back from Vegas.

On our way to Needles we again saw the mighty Colarado river that has been a presence on our trip through Arizona.

Today we have seen lots of Harley Davidsons, as we have from time-to-time on our trip. Sometimes we have seen just a couple, but often there are small groups on an organised trip whereby they ride but their bags and a spare bike follow in a pick-up. It seems to us if you really have a hankering for riding the route then this is a good compromise – it's a tough trip, and at least that way you can change your leathers for clean clothes at the end of the day. 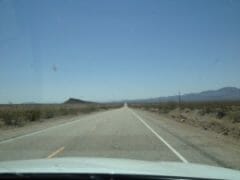 From Needles to Barstow the old road takes you across the flat Mojave desert and miles and miles of empty road, with no gas stations or people and where you need to be sure you have plenty of fuel before you set off. The Mojave desert is said to be one of the harshest places on the planet – that I can believe.

Unfortunately we arrived in Los Angeles at rush hour and it reminded us of the M25 in the UK. The last 50 miles driving from the outskirts to our final destination at Redondo Beach took a good deal longer than Doris said it should. Finally we arrived at our B&B place at 6.45 pm, so a very long day's driving for Steve.

The notes left for us gave tips on good places to eat and some were just across the road on Redondo Beach Pier, no more than a 5 minute walk. So that's where we headed after a quick change into long jeans, cardigan and boots to see the sunset, drink wine and have supper. We chose Kincaid's and we weren't disappointed. They have a large terrace (it was getting a bit too chilly for that), a restaurant, and a bar where you could eat from the same menu as the restaurant so we opted for that. Sat by the window where we could people-watch, we also saw flocks of wild pelicans as well as some very cheeky seagulls.