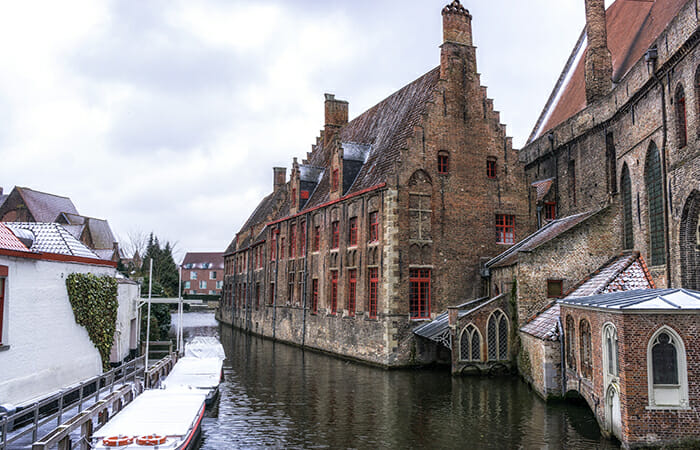 Staying in Brussels for 3 nights in February, to be honest even I packed too much and I only used our Weekend Packing List! Why was that? Partly I think because jeans take you everywhere, and one pair was enough for the 4 days. But also because it seems to me that when you have a favorite outfit, the desire is to wear it as much as possible.

These two factors coupled with the fact that it was cold and I had only packed one polo neck jumper meant that most of my clothes remained in the case.

I did take 2 pairs of shoes though, and with all the walking we did and the cobbled streets it was nice to change these in the evenings.

The cobbled streets and use of the underground Metro means walking to your final destination is likely to be the norm, so a small weekend bag which has both wheels and also rucksack straps makes it easier to get around (we use the Karabar Aragon – perfect size for budget airlines too).

We arrived via Eurostar from London at midday and used the Metro to get across the city. The machines all take cards which makes it easy, and as in most places it's cheaper to buy 24 hour passes than single journey ones. Be sure to get a Metro map and then it's pretty easy to find your way around. Just remember you need tickets to go in, but not out, of the Metro – unlike in London and other cities. First afternoon we made for Grand Place and its sights, followed by lunch at Chez Leon, a must for typical mussels and frites. Two of us are not really keen on mussels but decided to go for it, and had mussels Provençal style and fried mussels with frites, whilst the third had them marinière style. Washed down with beer we all agreed they were delicious.

Just around the corner from Chez Leon is Jeanneke Pis, the girl version of the famous Manneken Pis which was our next stop, like many tourists. It seems odd that the seat of the European Parliament should be famous for a statue of a small boy having a pee (and it is a very small statue).

After a compulsory stop at a chocolate shop for a mouthwatering selection of chocolates and macaroons, we headed back to our Airbnb apartment. A quick change, then out for dinner at Little Asia, a smart Asian restaurant in the small Chinatown area. Smart and pricey (our casual attire was fine though), but delicious with excellent service.

The next day we took the train to Bruges, which took around an hour and a half and because of weekend offers it was really cheap. Trains really do leave and arrive on time here and we were soon in Bruges (Brugge to the locals).

It's just a short walk from the station to the centre of this beautiful city. It's hard to imagine now that this was once the wealthiest city in Europe, with a far larger population than now. Some call it the ‘Venice of the north' with its waterways, but it also reminded me of Ljubljana. A canal boat ride is an absolute must regardless of the time of year, and even on a cold February afternoon it was worth it. We followed it with hot chocolate in a cosy hotel bar overlooking the water. 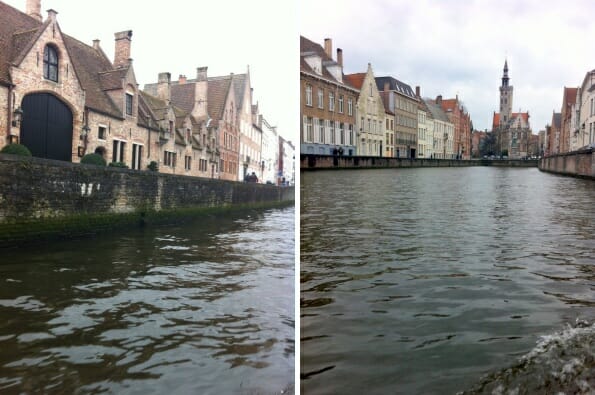 As it was a cold day we opted to see the Historium in the main square, which tells the history of Bruges at one point in time. The ticket included an exhibition and a 3D movie. The medieval buildings are a sight to behold, and to have so many still standing and in such great condition is remarkable.

Before the boat trip and the Historium we had stopped for lunch at The Bistro, a small restaurant where we were lucky to get the last table. They served delicious home-made food and it was surprisingly cheaper than Brussels. 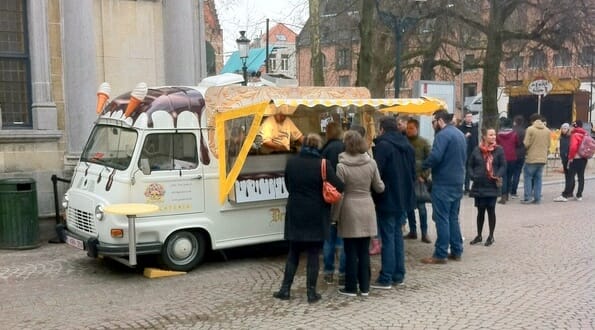 In fact, on our trip we found Brussels to be more expensive than either Bruges or Antwerp.

There were also endless beggars in the streets of Brussels – both refugees and locals – which was a real indictment on the centre for the European Parliament. Interestingly we didn't see signs of begging in either Bruges or Antwerp.

Back in Brussels for supper we headed for Place Sainte-Catherine – or the fish market – where smart fish restaurants abound, again not cheap though.

The following day we decided to take the 30 minute train ride to Antwerp, which had taken over from Bruges when the river silted up. Antwerp station is magnificent and only a short walk into the historic centre. You pass Reuben's house on the way and it's well worth a detour – allow a good hour and a half. 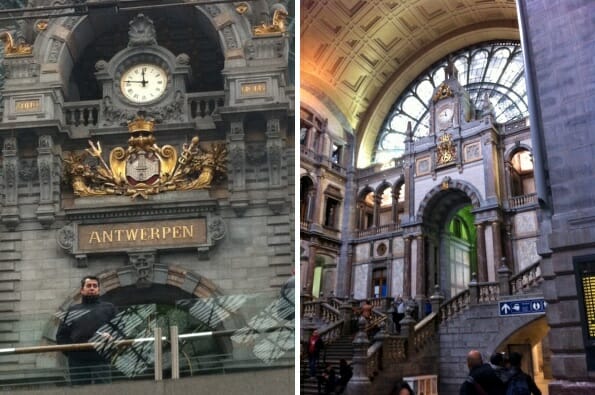 The Town Hall and Cathedral are worth a look too, and it is easy to walk around the medieval heart of the city. It's famous for its diamond trade, but we didn't dare even take a peak in the shop windows!

Just before we jumped back on the Eurostar in Brussels to go back to London we tried the frites with mayonnaise. Well, when in Rome… or in this case Brussels.

Top tip 1: Use the metro and rail to get around – it's fast, cheap, reliable and easy to use. Everyone speaks English and there are plenty of information points. For extra reassurance, you could download the Metro map before you leave home and plan your routes.

Top tip 2: Make sure you have coins for the public toilets; they all seem to charge around 50 cents.

Top tip 3: Definitely try the mussels – you may become a fan!