What We Packed – Corsica in June

So we are off for a week hopefully to get a real sense of the island. And whilst we have a 20 kilo hold luggage allowance each, old habits die hard. We use our Cabin Max bags designed for carry-on luggage as our suitcases of choice, and refer to our Corsica packing list.

The roads to our destination La Balagna in the hills above L'ile Rousse were twisty and narrow, often with steep drops on one side or low stone walls hidden in undergrowth. Very disconcerting when you found locals driving towards you on your side of the road and fast, without it would seem any intention of moving over! Or they would overtake on blind bends and think nothing of cutting in. However, it was all done with good grace and without horns tooting or gestures as you would expect back home.

Having read the information on the roads and how the locals drive we had taken insurance to cover the excess, which we would later be pleased we had. Our Peugeot 208 was new and considering it was the cheapest price bracket, it was a substantial car. We found the best deal through Holiday Autos.

We were staying just outside a village in the mountains in a converted olive mill next to a stream – total peace and quiet. Converted from being defunct and derelict, the mill wheel has long since gone and from the outside it looked a bit rustic but inside it was huge and gorgeous. The first night the frogs and cicadas were in full voice and we fell to sleep easily and peacefully. As the days passed we realised more and more what a pleasure and privilege it was to stay in this beautiful place, and considered ourselves so lucky to have found it via airbnb. We decided to drive down to L'ile Rousse and take a look around and have some supper. After parking, which as it was 6pm on a Sunday evening didn't prove difficult at all, (but make sure you have some Euro coins to pay the ticket price on exit), we wandered down to the sea front through the small streets lined with cafés getting ready for dinner service.

Corsica isn't a cheap destination and as we set out to choose somewhere to eat we knew the places a street back from the sea would be just as good but cheaper, but we decided that we wanted the sea views. We chose a restaurant called L'Escale, which has been there since 1903 but you wouldn't know it. It was modern, stylish and friendly. Here Steve tried the first of many Pietra; Corsican beer made from chestnut flour.

Corsica is not a destination that's popular with Brits, and French is the language spoken but nevertheless we found the staff helpful and friendly (and in the main they spoke English). The salads looked amazing and we tried the local delicacy of beignets filled with cheese; also calamari, very delicious washed down with house wine of excellent quality. Steve had a salad, followed by pasta with local ham and then a dessert. They then left a bottle of myrtle eau de vie (a local liqueur) on the table for us to help ourselves. We were dubious but we needn't have been for it was delicious and prompted us to find some to bring home. We especially wanted a bottle like this one with a sprig of myrtle inside. Even in this smart restaurant men were wearing shorts – albeit longer ones. The overall dress style was smart casual – clean and neat. 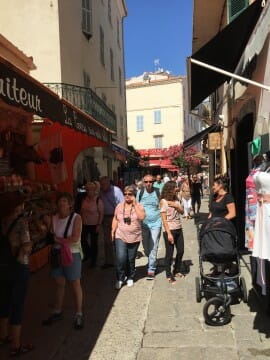 It was raining but warm. We travelled to Calvi, twisting through the mountain villages, stopping at Feliceto and Domaine Renucci for wine tasting (and purchasing, of course!); two bottles of red and two of white.

We arrived in Calvi after a 2.5 hour journey. Calvi isn't the easiest place to park, and heaven knows what it is like in peak season. This was the first time we had seen any tourist coaches which added to the congestion. The parking is all coins, so be sure to carry a pocket full.

It's really easy to navigate, with restaurants and bars on the sea front overlooking the marina and some very swanky boats. Delicious salads and seafoods… and fruit cocktail ice creams. We all had delicious salads this lunchtime. Not cheap but lovely. A leisurely lunch was followed by a walk up the Citadel, lots of steps but easy to stop on the way up as they twist and turn and great views, so very worth the effort. So much history. Christopher Columbus allegedly was born here, although that remains a bit of a mystery. What is certain though is that both Napoleon and Nelson came here.

Tuesday: Off to Bonifacio. 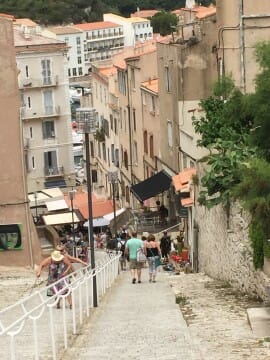 The South is different and not as dramatic (in our opinion) as the north, but lovely in its own way. In Bonifacio it was very busy and parking was a nightmare, and we ended up parking above the citadel which meant we had great views but it could have been a long way back, except that we hopped on the road train from the harbour and for 5 euros each we took the tour of the port and citadel and once it arrived at the car park and had to stop for traffic, we jumped off.

Nice lunch in the old town overlooking the harbour; very luxurious boats, very chic.
We took a boat trip, and the one hour short version for 17.50 euros was enough. Going into the cave was amazing, as was seeing the town from the sea. We were given handouts in English, so even though the talk was in French we could understand where we were.
It was a very long way back to the north but it was worth it and we stopped off in Almeria for a drink at a beach bar on the way back. Almeria is the site of an ancient Roman city which has been uncovered.

Went to Porto, and what turned out to be our favourite trip of the week. Very dramatic, beautiful, stunning scenery. En-route we stopped for coffee in Galeria, a tiny little seaside village. At the bakery we had yummy patisseries. Then we walked along the beach back to the car. We all voted this an amazing place and perfect for a beach holiday. Then on to Porto.

We had no idea just how dramatic the scenery would get as we drove through the Calanches de Piana and the Reserve Naturel de Scandola. Stunning doesn't begin to describe it. Porto was very quaint and it was easy to park. Lovely choice of restaurants, we chose Le Sud – a very nice, upmarket place with a limited handwritten menu. Then because the guide book had mentioned that the hotel Roches Rouges about 20 mins further on had the best views ever we decided to give it a go. We weren't disappointed! This view must rank as one of the best in the world, truly. We had drinks on the terrace before making the long twisty journey back. Lovely to have drinks, but the hotel's grand old days are past and someone needs to come and spend a lot to get its glamour back.

Went to St Florent, again a twisty mountain road and when we finally arrived it was a nightmare to try and park and this isn't even the height of the season. Really not worth the trip but stopped at a nice mountain cafe on the way back for lunch of salad and local meats. Decided we were all mountained out so went to Algajola near L'ile Rousse for a couple of hours by the sea, where we enjoyed the local ice cream. Then we pootled back to L'ile Rousse to watch boules and people gaze. 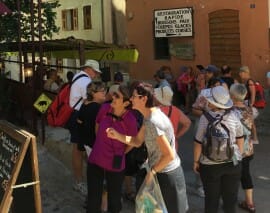 Went to Ajaccio via Corte. We stopped in Corte for morning coffee and loved the place, the old town is very quaint. We bought homemade beignets of apple and cheese from a street vendor for 3 euros, the cheapest food we had eaten here and delicious.

Then it was off to Ajaccio where we parked out by the port and walked in, a good move as it turned out. It was an OK place, and we went to Bonaparte's house despite the mixed reviews and enjoyed it. 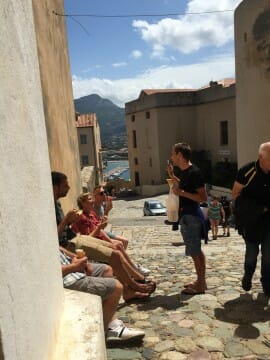 On our last day we returned to Calvi for a gentle stroll and sit by the amazing luxury boats. This was followed by lunch at La Cassata, an amazing place close to the harbour, at the back of a deli. This was a treasure from Trip Advisor, and a yummy way to while away a couple of hours. We had plates of local cheeses, meats, pate and fig conserve, washed down with local rosé wine from Calvi.

In the evening we went to Sant’Antonino; the oldest inhabited village in Corsica and on top of a mountain, it was owned by the same family for over a thousand years. Top tip: We went early evening after the crowds had gone, and had it pretty much to ourselves (and no trouble parking). There were some lovely restaurants including A Stalla but we were just too full from lunchtime to eat. Then we drove down to L'ile Rousse to have a drink in the square, a bottle of local rosé and watched the stressed proprietor move and rearrange all the tables and chairs. He was itching to move ours too and pounced to move ours after we left – very amusing!

Time to go home. We took a leisurely drive to Bastia, had a very quick look around the old town and then headed back to the airport to clean and refill the car.

The overall impression is of an island of contrasts – stunning aquamarine seas and long sandy beaches; mountains with villages precariously clutching to the sides; twisty, windy roads from one hill-top spectacle to another, where locals don’t talk in terms of distance between places but in time, and how long the journey will take; valleys of lush crops – peaches, apricots, oranges, lemons, cherries, vegetables… – plus local cheeses and meats, all fresh and really delicious. It was very easy to eat well and healthily.

The island is steeped in history having been attacked and conquered over and over again over many thousands of years. No wonder the villages are at the top of the mountains! We met friendly people and found a very relaxed way of being.

And as for the packing – we wore everything we took, didn’t wish for more and felt at ease and comfortable wherever we went. We look forward to returning some day soon.

Previous Post What We Wore - Hay Literary Festival
Next Post Sunscreen - Are We As Protected As We Thought?