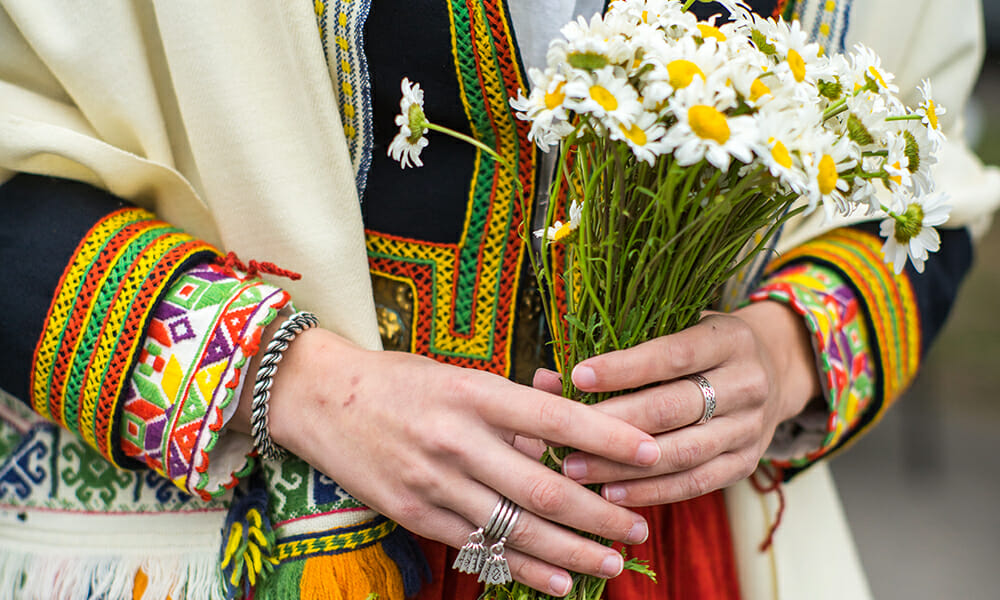 Despite being late June – i.e. summer – it was raining on our first day in Riga until late afternoon. The grey skies made you feel cold as well as damp, so be sure to pack an umbrella whatever time of year you visit and layer up to prevent getting too cold. 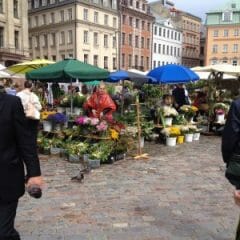 It was a real shame about the rain because with the longest day fast approaching the local square had a market which was full of flowers and flower garlands; a tradition at this time and a lovely garland can be had for €5. Summer Solstice is a big celebration here.

The trip from the airport was easy – the red taxi cabs are clean, take just 15 minutes and cost a reasonable €15 from the airport to the Old Town where we were staying. For a short break, being in the heart of the Old Town is perfect and our hotel (the Wellton Centrum) was contemporary yet set in an old building. It now boasts a stylish spa in the basement and staff that are only too willing to help you.

A great recommendation from them led us to Lido Alus Seta – a typical Latvian self service restaurant and bar in the heart of the Old Town and just off Dome Square near to the Cathedral. The salads were fresh, plentiful, original and inexpensive – as was the wide range of hot dishes and puddings. Great atmosphere, bustling and fun. Well worth trying but do avoid arriving when the walking tours get there for lunch, which is around 1pm. 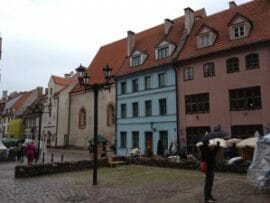 As you might expect, the streets in the Old Town are uneven and often cobbled so comfortable shoes are a must – although it's amazing how adept the local girls are at walking in high heels! Dress-wise, everything from stylish smart-casual through to walking trousers and fleeces were all there and perfectly acceptable. The people are very laid back and accepting, even of us tourists buying the flower garland headdresses to join in the celebrations.

A trip to the Tourist Information office meant we could pick up free maps and information, and also find out about events happening further out of town that sounded like they might be fun.

We chose a couple of restaurants and bars from TripAdvisor but both restaurants were fully booked both Friday and Saturday nights – so my suggestion would be to book ahead if there is somewhere you really want to try. There were plenty of other places to choose from though so getting food wasn't a problem, and for the unadventurous, there's even a TGI Friday's. We found a delightful little bar off the beaten track for drinks before dinner, mainly full of locals, and then a really funky bar up a cobbled alley on the way back to the hotel which was full of young Latvians and where we tried the Black Balsam for the first time. It was surprisingly good after the guidebooks had put me off, which is a lesson in itself – always make your own mind up rather than letting others make it for you. 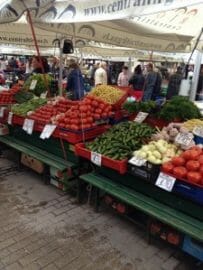 Day 2 started grey but with the promise of sunshine… and rain! We enjoyed a great buffet breakfast at our hotel – there was something for even the fussiest eaters, and champagne too. We set off for the market which is housed in five Zeppelin hangers across the canal and a short walk from our hotel. It was an amazing place and a must-visit on your trip – choose from fresh meats, cheeses, breads, pickles, smoked fish, you name it. So many types of fish, even caviar, and all so well displayed. Pickled vegetables including tomatoes – I had never thought of pickling tomatoes before but will try it now, and in fact the mixed vegetable pickles in huge jars looked fab. The market was spotlessly clean too, and not at all smelly like you often experience at home. 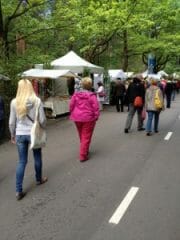 After a coffee in the park, sitting bohemian style on cushions and watching the world go by, we then took the tram out to Mezaparks where we we had been told there were Summer Solstice celebrations very much for the local people. There were craft stalls, a stage where different cultures showed how they celebrated the Summer Solstice, a concert area, local foods, and of course beer. Everyone was so friendly and we enjoyed a few hours wandering and taking in the atmosphere.

Tickets for the trams can be bought anywhere for less than a Euro a trip, just remember to validate them when you get on. This is by far the easiest and cheapest way of getting around. 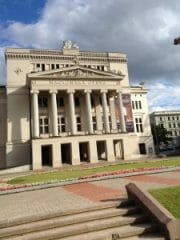 Back at the hotel, there was time for a swim, steam and sauna before a relaxing facial and chill-out time before our evening programme; we had tickets to see the Latvian National Orchestra at the Opera House. This is a beautiful little theatre and the tickets were really inexpensive. Dress was varied – some people dressed up and others didn't, but I would aim to be respectful so at least wear smart-casual attire and try to avoid jeans, although there's no official requirements. After the show we enjoyed a few drinks in a couple of bars before drifting off to bed, and by the way it was still daylight! It doesn't get dark until around 11pm this time of year, which takes some getting used to. 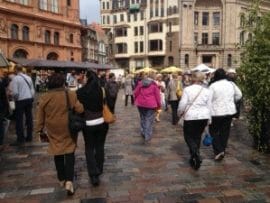 On our final day we awoke again to grey skies, and after breakfast we set off for the free walking tour of Old Riga. This is a great way to spend 2 hours and to learn more of the culture and history. Coupled with our museum trip on Friday this really helped us to understand Riga better. We learnt about the old walls and moat, the river that once flowed through the city and which is now buried. How traders arriving at the city were required to bring boulders for the streets as payment. How wealthy the city has been and how strategically important. To be honest there was so much to see that we simply ran out of time. A trip up the tower of St Peters is a must for some great views of the city, but we didn't make it to the island in the River Daugava or out into the countryside – but we were so impressed with this beautiful country and its friendly people that we plan to return.