Our first morning in Flagstaff, and we woke to snow! It's hilarious, from desert to mountains, from 98F to currently zero, this trip is full of twists and turns in weather as well as in landscape and people, and it's a lot of fun.

This morning we have paid for a full day's trip with Pappa Jim's Tours, so today we are both wearing walking trousers, long-sleeved shirts, fleece, walking jacket, scarf, ear muffs (for me) and walking boots. I decided not to bring gloves (a mistake) so I'm going to see if I can borrow a pair. Our foldaway rucksack will be getting its first airing too for our packed lunch etc…

…well we had the most amazing day with Jim taking us to sites that were off the known and popular tourist run, and meant we often had places all to ourselves. He also told us about the different Indian tribes that have lived in these parts for thousands of years (the Hopi tribe) and many hundreds of years (the Navajo). 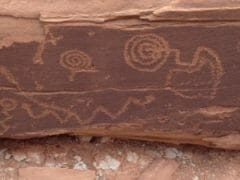 We visited ancient drawings on rocks in the middle of sandy canyons, where no road really existed. What the images mean has been lost in time but it was possible to make out many images quite clearly – turkeys, a man with a bow and arrow, deer… All of this was only possible in a 4×4 vehicle and to be honest, without a local guide I wouldn't have dared to set off down unmarked dirt tracks as we did.

We visited long-abandoned ancient Indian settlements of stone homes built on top of rock outcrops, where you could see for many miles. Some have as many as 100 rooms. We learnt the difference between Pueblos (Indians living in permanent settlements) and the nomadic tribes that would migrate to the mountains and then down into the valleys to grow crops, catch animals for meat, forage for nuts and berries, and trade. We learnt how sophisticated they were and how harshly they have been treated. Whilst trying to straddle two worlds – that of their own culture and that of the white man's – many were destroyed or driven to drink and drugs. 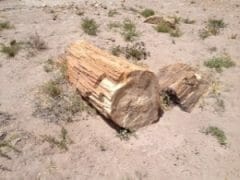 On the way to Flagstaff we had passed the Petrified Forest, but gave it a miss as time was marching on. So it was with real delight that we found that Jim planned to take us to an area of petrified wood. In the middle of the desert, miles from anyone or anywhere, we saw what looked like whole trees and huge pieces of tree trunk but which were in fact petrified and as hard as stone. They were literally strewn everywhere.

As we crossed the desert on a signless dirt road we would occasionally come across single houses. Unlike the Hopi who like to live in closeknit units, the Navajo like space and so often choose to live where there is no-one around and no facilities of any kind. We even saw a Sweat Lodge. Stopping to eat our packed lunch whilst gazing over the Painted Desert was breathtaking.

All this time we were making our way towards the Grand Canyon National Park (75 miles from Flagstaff) and ultimately to the Grand Canyon itself. It costs $25 per car for a permit to enter the park but it does last 7 days, and once inside we did see for the first time coach parties and more people. But even then, it wasn't anything like as many as I had expected when you read that the park gets over 5 million visitors a year. 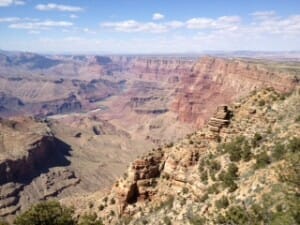 Again Jim took us away from the places most people go to, and showed us places where the views were just as spectacular but quieter. Most visitors head to the South Rim and that's where the facilities are.

It is possible to stay within the park but it does get booked up and is expensive, so it really is worth considering staying further out as we did and driving in each day. We stopped at various points along the rim, getting a different vista and sense of the Canyon and at one point we walked down into the canyon for half an hour which again gives a different perspective and is worth doing.But without a question of a doubt the best way to really appreciate the magnitude of the Canyon is to take a helicopter flight. We decided we wanted to fly from Grand Canyon airport whilst we were in the park, rather than taking one the many trips from Las Vegas. We chose to go with Papillon who have a great safety record and offer a range of trips to suit your budget. We opted for the cheapest and shortest trip of 30 minutes with a maximum of 6 passengers, and to be honest this was perfect. It was more than enough time to see the Canyon and as all helicopters have to fly the same path (as directed by the Government) you will get to see all that it is possible to see. TOP TIP: Choose a morning or late afternoon flight, when the shadows on the Canyon give it more depth and the colours look stronger.

The sheer scale of the Canyon takes your breath away and to be looking down on black buzzards circling below us gives a sense of scale of how huge the place is. Looking down at the mighty Colarado River it looked like a tiny stream, and yet it too is vast. Steve said he felt humbled and emotional even though he had been before; maybe the second time you take things in differently. TOP TIP: Do take the helicopter trip – you will not regret it!!